SEOUL, June 9 (Yonhap) -- A North Korean taekwondo demonstration team visiting South Korea for an international competition will have a separate performance in Seoul during its stay, officials said Friday.

And an official with the WTF said the ITF's team will also perform in two other cities -- Jeonju, some 50 kilometers west of Muju in North Jeolla Province, and Seoul -- on June 26 and 28.

In Seoul, the performance will take place at Kukkiwon, also known as the world taekwondo headquarters. The headquarters for the North Jeolla Provincial Government will host the show in Jeonju.

The WTF, headquartered in Seoul with South Korean Choue Chung-won at the helm, is the official world governing body of taekwondo, as sanctioned by the International Olympic Committee (IOC). The ITF, based in Vienna, is recognized by the North Korean government and is headed by North Korean Ri Yong-son.

This will be the ITF's first visit to South Korea since April 2007. An ITF demonstration team has never before performed at a WTF event taking place in South Korea.

The ITF's delegation of 36 will include Ri and Chang Ung, former ITF chief and the North's only IOC member. The 12 performers -- 10 men and two women -- are all from North Korea.

The ITF's team is scheduled to arrive in South Korea via Beijing on June 23 and leave the country on July 1.

The WTF is expected to seek a reciprocal visit to Pyongyang in September, when the ITF will organize its own world championships.

The two bodies signed a landmark agreement in August 2014, detailing plans for exchanges of each organization's demonstration teams.

They held their first joint performance during the opening ceremony of the 2015 WTF worlds in Chelyabinsk, Russia. 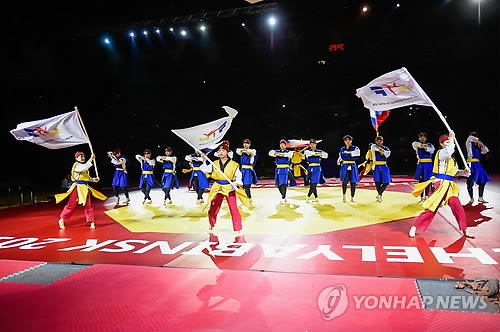