SEOUL, June 10 (Yonhap) -- South Korea's former foreign ministers have come out in support of Kang Kyung-hwa, a beleaguered diplomat nominated by President Moon Jae-in to be his first foreign minister.

Ten former top diplomats, who served as foreign ministers in the preceding conservative and liberal governments, issued a joint statement Saturday, saying Kang is the right person to deal actively with the nation's diplomatic challenges and pending thorny issues.

"Foreign minister nominee Kang Kyung-hwa has a proven track record in the international society through her longstanding activities at the United Nations and other posts," the statement said.

"Kang is the right person to resolve pending diplomatic issues facing our country, including relations with the four surrounding superpowers." 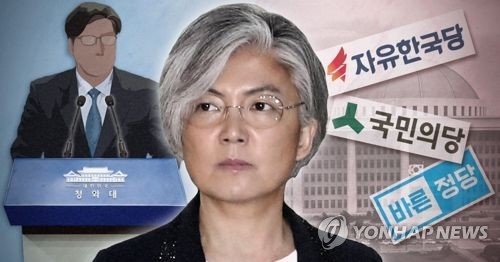 The statement of support came amid a strong objection from opposition parties against Kang over a series of her past wrongdoings that include false registration of address for her daughter and possible tax evasion.

Kang's appointment does not require parliamentary approval, but an appointment without the assembly's blessing may cast a political burden on the president and possibly forfeit Moon's chance to win much-needed support from the opposition bloc for his other nominees and policies.

Kang had worked full time at the United Nations at least since 2006, and was serving as a special adviser to U.N. Secretary-General Antonio Guterres at the time of her nomination as South Korea's new foreign minister. 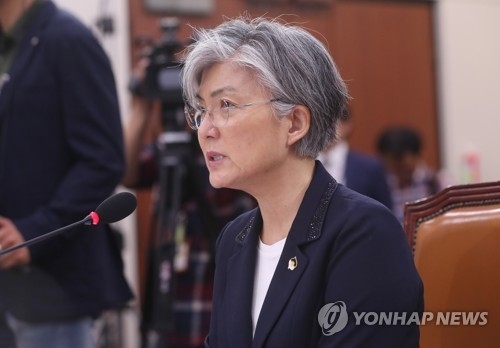 The statement went on to say that Kang has sufficient experience to effectively cope with North Korea's nuclear and missile problems through cooperation with the international community.

"With the new government's first summit talks with the U.S. imminent, Kang should be appointed as foreign minister as soon as possible," the statement said, urging the National Assembly to help pave the ground for her appointment.

In a related move, the foreign ministry branch of the civil servant union issued a statement Wednesday calling for giving Kang an opportunity to serve the country.