According to data provided by the Korea Automobile Importers and Distributors Association (KAIDA), the percentage of imported cars newly registered with companies in the January-May period stood at 34.5 percent.

"Of the 94,397 vehicles imported, 32,581 were bought by companies in the five-month period the association said. "This is down 0.9 percentage points compared to a year earlier when the numbers were 35.4 percent."

Data showed that in 2010, 49.8 percent of all corporate cars were imports, but this started falling afterwards.

The decline this year is noteworthy since sales of imported cars moved up 1.2 percent on-year to 94,397 units as of May.

In particular, in April and May, import cars accounted for 32 percent of all corporate cars registered in the country.

KAIDA said the poor showing reflects, in part, consumer distrust of diesel cars in the wake of Volkswagen's emissions scandal in 2015. The so-called dieselgate scandal and the subsequent backlash hurt Volkswagen, as well as its luxury brand Audi, and affected the image of diesel cars in general as more fuel efficient alternatives to gasoline-powered vehicles.

Besides the poor public perception of diesels, where German carmakers have an edge, government efforts to prevent corporate cars from being utilized as personal transportation played a role in curbing sales.

In the past, companies that registered vehicles as their corporate vehicles were able to get full tax deductions on the purchases, as well as maintenance. Starting in January 2016, the rules were changed to root out company fleet cars that were exclusively used for personal use and put a cap on tax deductions.

On the other hand, industry sources said that while the clamp down affected sales of some luxury vehicles, it did not affect ultra expensive cars being registered as company cars. 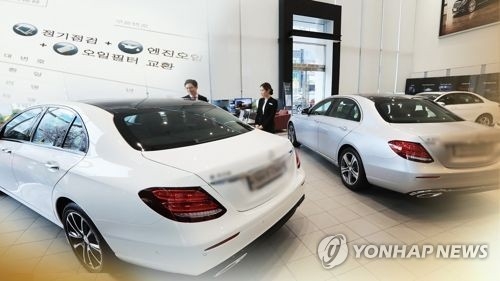