SEOUL, June 11 (Yonhap) -- President Moon Jae-in will address the nation this week on the need to devise a supplementary budget largely aimed at creating new jobs, his aides said Sunday, in an apparent attempt to pressure the reluctant opposition parties to move forward.

The president was set to deliver a state of the nation address at the National Assembly on Monday, according to officials at the presidential office Cheong Wa Dae.

The Moon Jae-in administration has submitted to the opposition-led parliament a request for an 11.2 trillion-won (US$9.96 billion) extra budget.

The main opposition Liberty Korea Party (LKP) is said to be generally opposed to the extra budget, with some of its lawmakers insisting that an additional budget requires an anticipated economic slump and mass unemployment crisis. 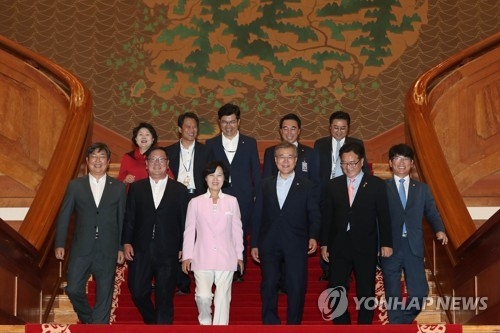 The LKP, however, is seen to be using the extra budget as a leverage, to demand the withdrawal of some of the president's minister nominees that it has deemed unfit.

Such designates include Foreign Minister nominee Kang Kyung-wha, who has admitted to a number of past wrongdoings, including false registration of address, which may violate a set of standards set by the president himself for ranking government officials.

"Should President Moon appoint new officials who are unfit under his own standards, we cannot but have to terminate our cooperation on all other issues, such as a government reorganization and passing the bill on the supplementary budget," an LKP lawmaker said earlier, while speaking on condition of anonymity.

"The party will do everything it can to block the government bills."

President Moon is widely expected to ask the opposition party to at least separate the issues, instead of placing its demand for one in exchange for the other.

Also, the president will likely re-emphasize a need to increase government spending during the year, citing unemployment rates that Cheong Wa Dae says are already at record-high levels.

The country's overall jobless rate reached a 17-year-high of 4.2 percent in April, while that of people aged between 15 and 29 years came to 11.2 percent, the second highest in the country's history, the presidential office said earlier. 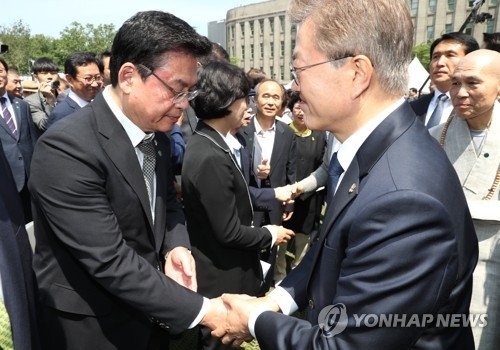 Apparently seeking to further persuade parliamentary leaders to lend their support for the new government, President Moon has also offered to meet with ruling and opposition party leaders of parliamentary committees this week.

Rep. Chung Woo-taik, floor leader and acting president of the main opposition LKP, has already declared his boycott of such a meeting.

The main opposition party controls 107 seats in the 300-seat parliament. The ruling Democratic Party has 120, the largest number for a single political party but still far short of a house majority.

(LEAD) President to address nation on need to create jobs

(LEAD) President to address nation on need to create jobs