SEOUL, June 11 (Yonhap) -- The diplomatic row between Seoul and Beijing over the deployment of the U.S. anti-missile system in the country that hurt sales of South Korean cars in China has benefited Japanese automakers, data showed Sunday.

Numbers provided by local carmakers and the China Passenger Car Association showed that from March to May of this year, sales of vehicles made by Hyundai Motor Co. and its sister company Kia Motors Corp. reached 175,576 units, down 60.8 percent from 447,420 cars sold a year earlier.

At the same time, sales of Japanese cars made by such companies as Nissan, Toyota and Honda jumped 24 percent in the world's largest automobile market.

Market watchers said that the rise in Japanese car sales comes as they churned out new models and strengthened their SUV lineups to attract customers.

South Korea has maintained that THAAD is needed to counter growing nuclear and missile threats from North Korea, while China has stringently opposed the deployment as hurting its security interests.

Market experts pointed out that Japanese carmakers also took a pounding when territorial issues emerged between Tokyo and Beijing in late 2012.

In that year, the market share of Hyundai and Kia rose to 10.2 percent, while numbers for Japanese carmakers plunged to 6.5 percent.

This year, the two South Korean carmakers reported a market share of 4.23 percent in China from January through April, down from 6.92 percent a year earlier. Japanese carmakers expanded their presence to 16.86 percent from 14.34 percent.

Hyundai and Kia's market share has been dropping since accounting for 10.4 percent sales in China in 2014.

Industry watchers said that unless there is a turnaround, South Korean carmakers' market presence will further decline this year. 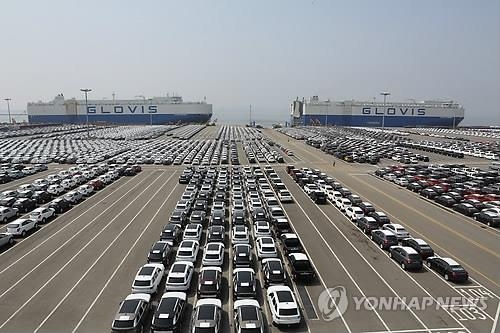