The move comes as President Moon Jae-in on May 22 ordered a "policy inspection" on the decision-making process of the 22 trillion-won (US$20 billion) project.

In 2008, the project was launched under the Lee Myung-bak administration to clean up rivers, and mitigate seasonal floods and droughts.

The former administrations under Lee and his successor Park Geun-hye claimed that the project helped restore the ecosystem. But critics said that the dam system worsened water quality and sparked the spread of green tides that are toxic to fish and other aquatic animals.

The Board of Audit and Inspection (BAI) is likely to make a final decision soon over the probe's launch as it has reviewed relevant documents for the river refurbishment project, sources added.

On the deployment of an advanced U.S. missile defense system, the BAI said it is closely monitoring the issue.

A defense ministry official is facing punitive measures for ordering the intentional omission of the information on the four launchers from the ministry's report to the presidential office.

"Whether to launch a possible probe will be decided by taking into account the government's situation," an agency official said. "We can start an inspection if needed even though the defense minister has not asked us to do so." 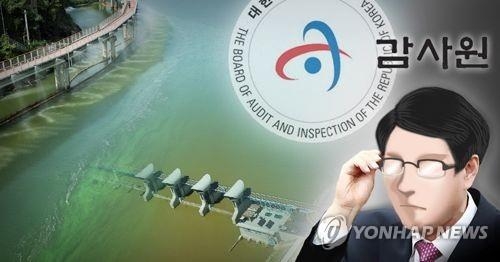