SUWON, South Korea, June 11 (Yonhap) -- England won the FIFA U-20 World Cup in South Korea after edging out Venezuela 1-0 in the final on Sunday.

Dominic Calvert-Lewin's first-half strike lifted England to their first U-20 football title in their 11th tournament appearance. It was also England's first title in a FIFA men's competition since their senior team's victory at the 1966 World Cup at home.

Calvert-Lewin saw his header saved by Farinez in the 32nd, but was able to find the back of the net two minutes later. The Everton forward first won the ball against Nahuel Ferraresi in the air, and followed with a right footed shot. After his first attempt was denied, Calvert-Lewin took the rebound and slotted it home with his left foot.

Adalberto Penaranda then stepped up to try to score an equalizer for Venezuela, but his effort in the 39th and curling free kick in the 42nd were off target.

Venezuela in the 73rd got their best chance to level the score when Penaranda was brought down by England defender Jake Clarke-Salter in the box and awarded with a penalty by referee Bjorn Kuipers following a video review.

Penranda took the spot kick, but Woodman got the piece of the ball and saved England.

Venezuela pushed forward to get the equalizer, but time was running out. In four minutes of added time, even goalkeeper Farinez fired a shot, but failed to unlock England's solid defense. 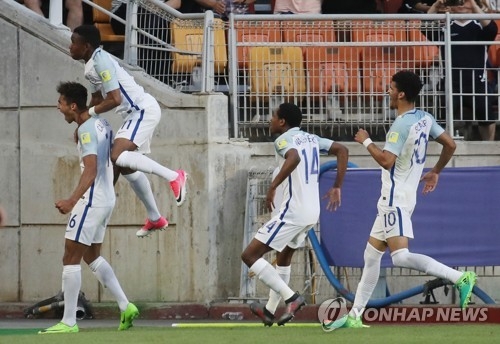 England edge past Venezuela to win FIFA U-20 World Cup in S. Korea

England edge past Venezuela to win FIFA U-20 World Cup in S. Korea