SEOUL, June 12 (Yonhap) -- South Korea's 10 most valuable companies account for nearly 37 percent of the country's stock market capitalization, but the portion has inched down this year, data showed Monday.

The combined market value of Samsung Electronics Co. and the nine other largest-cap firms came to 569 trillion won (US$506 billion) as of last Monday, up 14.7 percent from the end of last year, according to the data by the Korea Exchange.

Over the cited period, the total market capitalization jumped 17.2 percent to 1,534 trillion won.

The percentage of their value to the total market capitalization, however, edged down during the period, with the number dropping to 37.08 percent from 37.90 percent.

The slight drop was attributed to Samsung's cancellation of treasury shares and investors' shift to mid-cap companies from large caps. 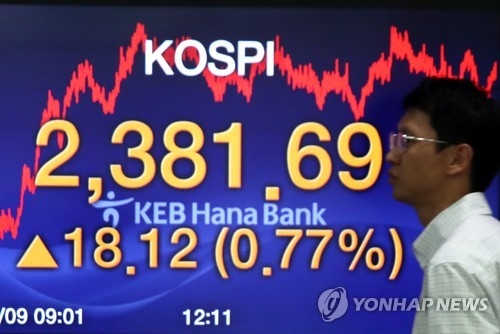 In February, the global tech giant announced a plan to cancel its existing treasury shares worth 49 trillion won, saying its strong performance and cash holdings have reduced the necessity to hold them. Since then, Samsung has retired 21 trillion won worth of treasury shares.

Treasury shares refer to those bought back by issuing companies. Their cancellation normally benefits investors as it cuts the number of shares in circulation.

Samsung was by far the largest-cap company, with a market value of about 300 trillion won, followed by chip giant SK hynix Inc. with 40.8 trillion won and leading automaker Hyundai Motor Co. with 35.6 trillion won.
(END)