According to the data by corporate tracker CEO Score, 8 in 10 companies that marked up products priced from November to May saw drops in their sales cost ratios.

A decrease in the ratio translates into companies spending less to produce goods and services.

The expense to sales numbers for Nongshim Co., the nation's top instant noodle maker, reached 67.8 percent late last year, down 1.4 percentage points from the previous year. Still, the company raised the price of its noodle products 5.5 percent in December.

Another major industry player, Samyang Foods Co., raised the price of its instant noodle products 5.5 percent in May, though its sales cost ratio deceased 1 percentage point on-year to 74.4 percent.

South Korea's largest brewer Oriental Brewery and other beverage makers, including Hite Jinro Co. and Lotte Chilsung Beverage Co., also raised prices even though they all spent less to make the goods they sold on the market.

"The companies are claiming that the hikes are not significant since they had frozen prices for the last couple of years," a CEO Score official said. "Yet, they can't avoid the criticism that they raised the prices amid political turmoil following the impeachment of former President Park Geun-hye."

During and following the impeachment of Park, the government suffered from a power vacuum that made it hard for corporate regulators to keep tabs on companies and prevent them from taking advantage of the confusion to increase their earnings at the expense of consumers. 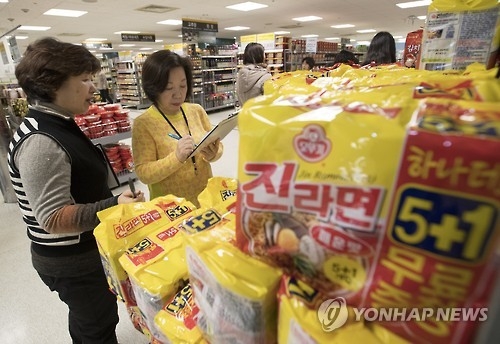