SEOUL, June 12 (Yonhap) -- Prosecutors were set to question the daughter of former President Park Geun-hye's longtime friend Monday as part of a probe into a massive influence-peddling scandal that led to Park's removal from office.

Chung Yoo-ra has been summoned to appear at the Seoul Central District Prosecutors' Office in the morning, the prosecution said.

The 21-year-old daughter of Choi Soon-sil has been accused of receiving undue admission and grading favors from Ewha Womans University in Seoul and irregular funding for her equestrian training from Samsung Group based on her mother's ties to Park.

The summons comes nine days after a court refused to issue an arrest warrant for Chung, saying it's difficult to recognize the reason and the need for an arrest.

The prosecution will likely decide whether to request an arrest warrant again after the interrogation.

She was extradited from Denmark late last month and detained immediately on arrival in Seoul. Chung has so far denied any knowledge of the allegations against her.

Choi and Park are currently in jail, and standing trial over a string of corruption allegations, including bribery charges involving Samsung. 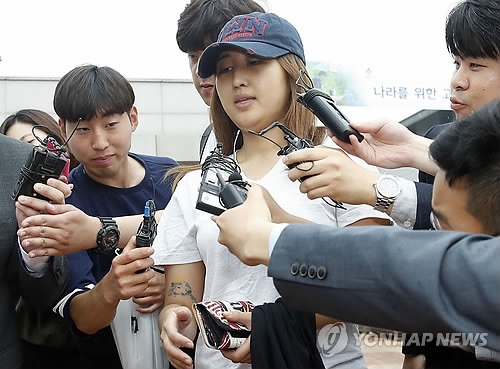