SEOUL, June 12 (Yonhap) -- President Moon Jae-in called for swift action by the parliament to create an extra budget Monday, saying the budget may not be enough to solve all the problems facing the nation but the country may soon face a crisis without it.

"Economy requires (the right measures) at the right time," the president said in a state of the nation address delivered at the National Assembly.

The nationally televised address marked the first of its kind since Moon came into office May 10. He noted it also marked the first presidential address ever for the passage of a supplementary budget bill. 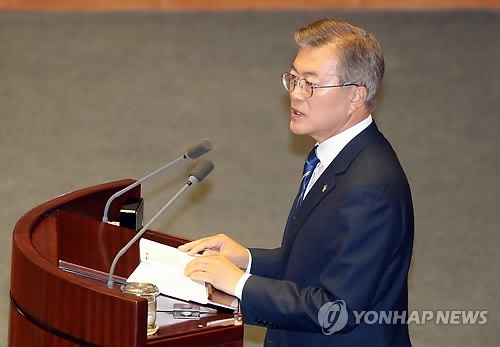 "I heard this was the first state of the nation address for an extra budget in our history. I wish you would consider it as part of my efforts to better communicate and work with the National Assembly. But what I want you to pay more attention to is the urgency of a supplementary budget for jobs," he said.

Moon's trip to the parliament came as the government is seeking an 11.2 trillion-won (US$9.95 billion) extra budget.

A government bill on the additional budget was submitted only last week, but the main opposition Liberty Korea Party clearly remains against it, insisting the law requires anticipation of an economic slump and resulting mass unemployment for an extra budget.

The president asserted the country's unemployment rate was already at a record high level, which he said will lead to a crisis if left untouched.

The president noted the country's jobless rate reached a 17-year high of 4.2 percent in April with the jobless rate of people aged between 15 and 29 years coming to 11.2 percent, the highest level for April since the country began compiling such data in 1999.

"If we leave such high unemployment rates alone, we may face an economic crisis that is as serious as a national disaster," Moon said.

The president said most of the additional government spending, if approved, will go to create up to 110,000 new jobs, especially for youth.

They will include some 12,000 new jobs in the public safety and security sector, such as new police officers, fire fighters and animal quarantine officials. Another 24,000 new jobs will be added in the social services sector as the government also seeks to build up to 360 new state-run child care centers.

The money will also help create up to 5,000 new jobs in the private sector. The government will provide wages for every third new worker hired at a small or medium-sized enterprise for up to three years, the president said.

"I say this once again, but new jobs are at the heart of a solution for our problems. Of course, it is difficult to solve everything at once. But we must do what we can and do it now," he added.

"There is only one solution. That is to increase the number of good, quality jobs. We need to realize a great shift in our economic paradigm where we will achieve growth by creating new jobs, instead of expecting new jobs as the result of growth," the president said.

"I ask for your active cooperation to have the bill on the extra budget passed at the earliest date possible, so it can create the positive effect we expect," he added.