SEOUL, June 12 (Yonhap) -- The chief of South Korea's central bank said Monday that the Bank of Korea may take a monetary tightening approach if the economy shows signs of a robust recovery.

Still, BOK Gov. Lee Ju-yeol remained cautious, noting the central bank needs to maintain the current monetary easing stance for the time being given uncertainties in the country's path to growth and inflationary pressure on the demand side are not high despite signs of economic recovery.

South Korea's economy has been on a modest recovery path due to an increase in exports and investments.

"As we may need to adjust our monetary easing stance in case economic conditions improve remarkably, we should thoroughly examine such possibility," Lee said in a speech marking the 67th anniversary of the founding of the BOK.

It marked the first time that Lee has mentioned the possibility of adjusting the current monetary policy position. 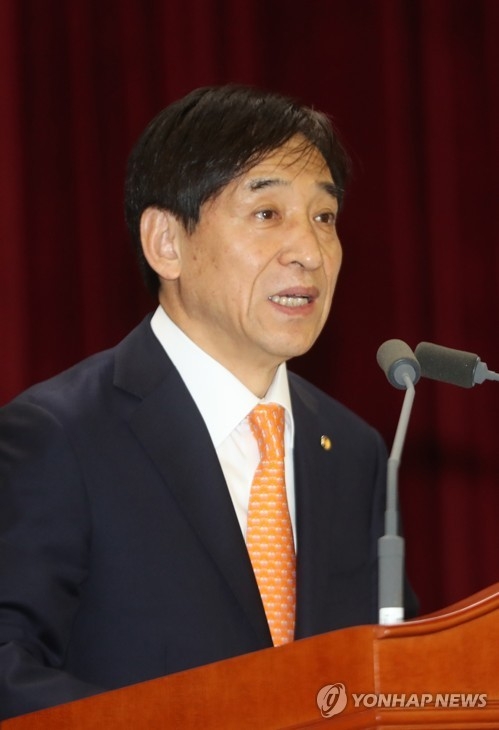 Last month, the BOK unanimously voted to keep the key rate at 1.25 percent, extending its wait-and-see approach for the 11th consecutive month.

In May, Lee vowed not to "mechanically raise" the key rate to be in line with U.S. rate hikes that were marked up by a quarter of a percentage point two months earlier to a target range of 0.75 to 1 percent. The U.S. Federal Reserve has signaled that additional hikes would be made in a gradual manner later this year.

John C. Williams, president and CEO of the Federal Reserve Bank of San Francisco, said earlier this month that three rate increases this year should be viewed as a reasonable baseline estimate, but there is potential for upside occurrences in the economy.

"I could imagine if the economy strengthens, four rate increases this year would be appropriate," Williams said in a news conference in Seoul. He said the end point of the rate hike cycle is probably 2.75 or 3 percent.

Lee expected the country's economic growth to exceed the growth rate of 2.6 percent this year if the economy continues to expand throughout the year. In April, the central bank raised its growth outlook for the country's gross domestic product to 2.6 percent for 2017, up 0.1 percentage point from its previous estimate released in January.

Tensions persist on the Korean Peninsula over the North's nuclear and missile programs.