South Korea, ranked No. 43 in the latest FIFA rankings, will take on No. 88 Qatar at Jassim Bin Hamad Stadium in Doha 10 p.m. Tuesday or 4 a.m. Wednesday, Seoul time. Both teams are in Group A in the final Asian qualifying round for the 2018 FIFA World Cup, along with Iran, Uzbekistan, Syria and China.

With only three matches remaining, South Korea are second in the group after amassing 13 points from four wins, one draw and two losses. They trail Iran by four points and sit just one point above Uzbekistan. Qatar are bottom dwellers with one win, one draw and five losses.

In the Asian qualifying campaign, only the top two nations will earn automatic berths, while the third-place team will have to go through playoffs. A loss against Qatar could put South Korea's bid for a ninth consecutive World Cup appearance in jeopardy. 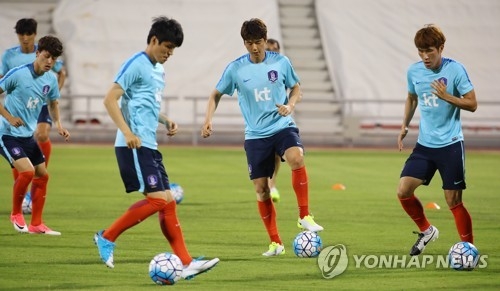 Numbers show that South Korea are on the superior side. Against Qatar, South Korea collected five wins, two draws and one loss. The last time South Korea lost to Qatar was in 1984, when they fell 1-0 at the Asian Cup.

In their latest meeting in October 2016 in Seoul, South Korea defeated Qatar 3-2. South Koreans were strong even in the Qatari capital as they marked two wins and one draw in the matches played in Doha.

South Korea, led by head coach Uli Stielike, however, have yet to win away from home in the final qualifying round which started in September 2016. Stielike's side had a scoreless draw against Syria on the road, and suffered a 1-0 loss to Iran in Tehran. In March, South Korea were pipped by China 1-0 in Changsha.

South Korea showed a shaky performance on the road last week as they played to a 0-0 draw with Iraq in a tune-up in the United Arab Emirates. The 24-man squad, however, should have adjusted to the region's hot weather as well as environment in the Middle East before landing in Doha on Saturday.

Stielike tested a back three system, using captain Ki Sung-yueng as libero, against Iraq, but the German coach could use his familiar four-man defense against Qatar. Against Iraq, South Korea were not only held to a scoreless draw, but they also failed to launch a shot on target.

Tottenham Hotspur talisman Son Heung-min, who notched 21 goals in all competitions in this past season, will lead the attack for South Korea, and he is expected to play with FC Augsburg forward Ji Dong-won, and FC Red Bull Salzburg striker Hwang Hee-chan.

Nam Tae-hee, an attacking midfielder who plays with Qatari side Lehkwiya, will also likely start as he knows more about Qatari football than other any other player. Nam was recently crowned Qatar Football Association (QFA) Player of the Year after leading Lehkwiya to the domestic league championship.

In defense, two South Koreans in the Chinese league -- Hong Jeong-ho and Jang Hyun-soo -- are expected to form center defense. 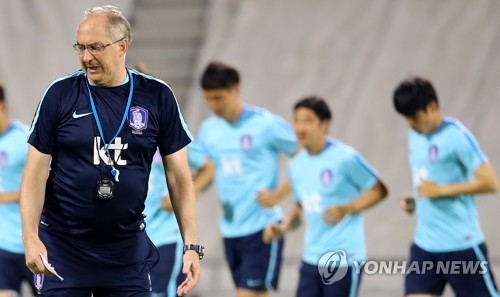 A bit of good news for Stielike's team is that Qatar's target man Sebastian Soria will not be able to play due to yellow card accumulation from previous matches. Soria was the most threatening force when South Korea hosted Qatar last year as the Uruguay-born striker scored a goal and earned a penalty.

Qatar, however, still can test South Korean defense with Rodrigo Tabata, a Brazil-born veteran attacking midfielder, and Akram Afif, the 20-year-old forward who is with Spanish club Sporting de Gijon.

Qatar are virtually out of the World Cup qualifying contention, although they still have very slim chance of finishing third in the ground and advance to the playoffs. Jorge Fossati's team had their tune-up for South Korean contest last week by playing a friendly with North Korea at Jassim Bin Hamad Stadium. The hosts of the 2022 FIFA World Cup played to a 2-2 draw with the North Koreans.