SEOUL, June 12 (Yonhap) -- North Korea has yet to ask South Korea to approve a plan by a North Korean taekwondo demonstration team to visit the South for an international competition, Seoul's unification ministry said Monday.

On June 4, North Korea submitted a roster for the competition to the WTF, according to Seoul's unification ministry.

"The North has yet to apply for Seoul's approval of the team's trip," Lee Duk-haeng, ministry spokesman, told a regular press briefing.

A 36-member delegation of athletes and ITF officials will visit South Korea, among which the number of North Korean nationals is 32.

The ITF's team is scheduled to perform during the event's opening and closing ceremonies on June 24 and 30 with a WTF team.

Last month, the ministry announced its plan to flexibly consider resuming inter-Korean civilian exchanges to an extent that the move would not compromise the international sanctions regime.

The government said that there is no change in its stance about the resumption of exchanges at the nongovernment level.

The ministry has approved 15 civic groups' requests to contact North Korea since liberal President Moon Jae-in took office in May. 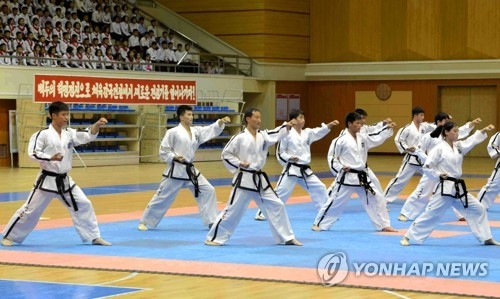