SEOUL, June 12 (Yonhap) -- South Korea's foreign ministry said Monday that it has called for Japan to be more careful in making any comments on such thorny bilateral issues as how to resolve the long-running dispute over Japan's wartime sexual slavery of Korean women.

This was in response to controversial remarks by Toshihiro Nikai, secretary-general of Japan's ruling Liberal Democratic Party. In his meeting with South Korean lawmakers on Saturday, he called for efforts to "eradicate" those seeking any tricks.

He didn't mention any specific issue but his remarks as special envoy for Japanese Prime Minister Shinzo Abe were interpreted by critics as pointing to those demanding renegotiation of a 2015 deal signed between the two neighbors on the so-called comfort women issue.

"It is necessary to be careful in making any comments on bilateral relations between the two countries such as the comfort women matter," a foreign ministry official said on condition of anonymity. 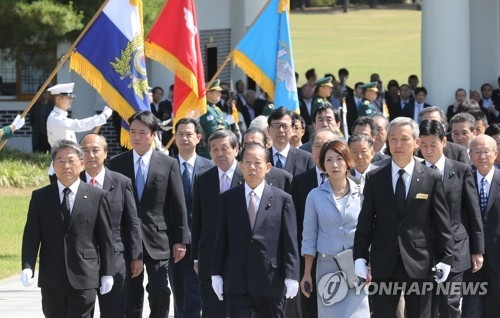 He added that the government stance has been relayed to Tokyo recently.

The comfort women, who refer to those forced into frontline brothels for Japanese troops during World War II, have been a thorny diplomatic issue between Seoul and Japan.

Though the two signed a deal in December 2015 to resolve the issue once and for all, critics have called for its renegotiation, saying that it was hastily arranged without seeking public consensus and securing a heart-felt apology from Japan.

President Moon Jae-in said in his telephone conversation with Abe following his inauguration on May 10 that many South Koreans cannot accept the deal "emotionally," hinting that his government might be in pursuit of changes to it.

Nikai is to meet with President Moon on Monday and deliver Abe's letter to him. His visit to South Korea is a return for Moon's special envoy to Japan who earlier delivered his personal letter to the Japanese leader.

S. Korea calls for Japan to be careful in making comments on comfort women issue

S. Korea calls for Japan to be careful in making comments on comfort women issue