"(We) need to make a really wonderful military which serves and sacrifices for the public and which the public trusts," Song Young-moo, President Moon Jae-in's pick for the next defense minister, told reporters after his meeting with incumbent Minister Han Min-koo at the ministry in central Seoul.

"The warfare paradigms for the Army, Navy and Air Force are surely changing... I mean we need to think about a new military that could (correspond to) the changes of the warfare environment and weapons system," Song noted.

The former chief Navy commander was named a day earlier to spearhead Moon's election promise to revamp the military and its weapon systems and to step up defense against North Korea's increasing nuclear and missile threats. He needs to undergo parliamentary confirmation hearing before taking office.

The military leadership should proactively follow the ideologies of the commander-in-chief, not burdening him, the nominee said, hinting at his determination for reform efforts.

Dismissing a rumor of his alleged involvement in a military procurement scandal in 2006, Song also said "Since and after my service at the military academy and the military, I have put top priority on the state and military and have worked for them." 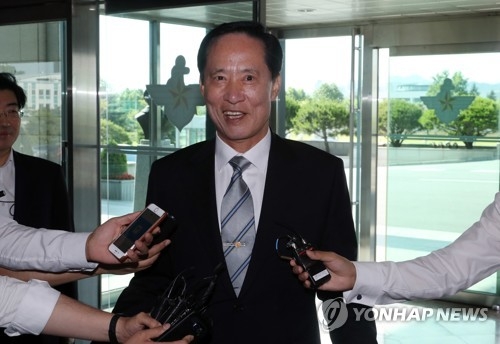