"Basically, the government must help foster good conditions for the civil sector to make investments to create jobs," the party said in a statement.

"We cannot agree to an extra budget bill that conflicts with the National Finance Act," it added.

The party insists that an extra budget to create jobs conflicts with the act that stipulates it can only be drawn up in such cases as war or massive natural disasters, economic recession, mass unemployment and crucial changes in cross-border relations.

The government and ruling party, however, see the current situation as a case of mass unemployment.

The minor opposition People's Party also pointed out that the civil sector must lead efforts for job growth, and that a "structural reform" must first be carried out.

"We will thoroughly check whether it would impose a fiscal burden on the state in the decades ahead," he added.

The ruling Democratic Party, however, hailed Moon's speech as an urgent appeal to underscore that the first step to address social polarization is addressing the unemployment issue.

"The budget will be drawn up without plans to collect more taxes or issue state bonds," Park Wan-joo, the party spokesman, told reporters.

"The opposition parties might have agreed with the president's remarks that (if the government) does not do anything when it still has the economic capacity, it would only amount to a dereliction of duty," he added.

The Justice Party also gave a positive response, calling on the Moon government to craft more "active and bold" ways to address a range of labor issues.

Earlier in the day, the Democratic Party, People's Party and Bareun Party agreed to deliberate on the extra budget bill during a meeting presided over by National Assembly Speaker Chung Sye-kyun.

The LKP, which did not join the regular talks, denounced the agreement, saying that the ruling bloc has no intention of fostering smooth cooperation with it.

It also said that it would not cooperate with any additional legislative steps for the budget bill. 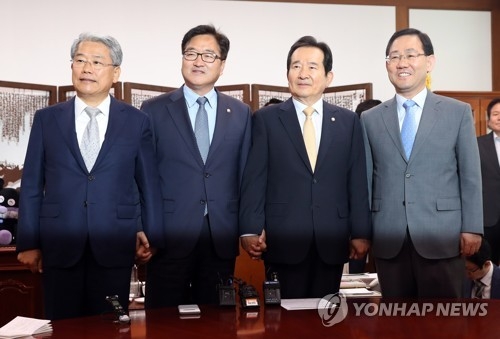