The 3rd Marine Division stationed at a camp in Japan's Okinawa is conducting military maneuvers in South Korea by mobilizing U.S. utility task vehicles (UTV), according to officials at the allies' marines.

The Korea Marine Exercise Program (KMEP) is being carried out this month in mountainous areas and cities here.

A UTV developed to maximize mobility has been used by U.S. Marines since February.

The move is believed to be aimed at matching the operation system of UTVs with features optimizing South Korean geography to better counter North Korea in the event of war.

The vehicle can be airlifted by V-22 Osprey tilt-rotor aircraft or Sikorsky's CH-53E Super Stallion helicopter due to its lightness. 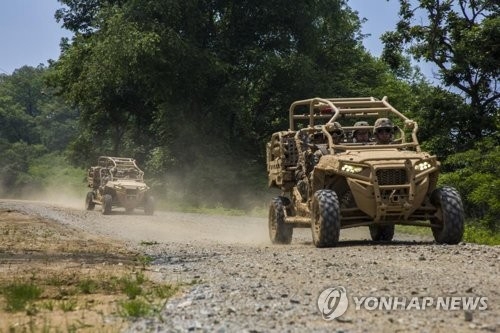