In his meeting with FIFA chief Gianni Infantino on Monday, President Moon Jae-in suggested forming a regional bloc with communist North Korea and other Northeast Asian countries to jointly host the FIFA World Cup in 2030.

According to the presidential office Cheong Wa Dae, Infantino said there will likely be "difficulties," but also said such a vision itself "can be a very powerful message."

Earlier in the day, Infantino also met with Korea Football Association (KFA) boss Chung Mong-gyu, who first broached the joint bid idea with China, Japan and North Korea in March this year. When asked about Chung's plan, Infantino told Yonhap News Agency, "We did talk about it, but we still have lots of time for that."

On a few occasions, Chung has publicly stated his hopes of bringing the World Cup to the region, saying Northeast Asia is "an attractive football market."

The World Cup will expand from 32 nations to 48 participants starting with the 2026 tournament. The United States, Canada and Mexico announced a joint bid in April, and if their attempt is successful, the 2026 competition will be the first FIFA World Cup held in three nations.

And FIFA's move to relax its continental rotation policy may give Northeast Asia a boost. 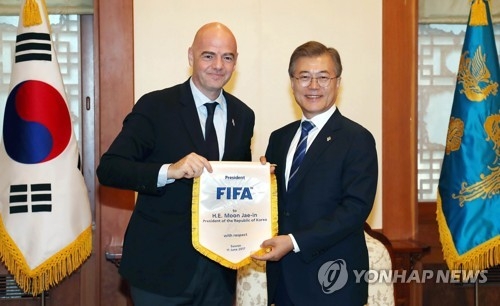 In that case, with Qatar hosting the 2022 World Cup, the earliest Asia can bid for another World Cup will be 2030.

While that may open the door for a joint Asian bid, China is hoping to stage the competition on its own. President Xi Jinping, who will meet Infantino later this week, is a huge fan of football, and three major Chinese companies have inked sponsorship deals with FIFA over the past year.

Japan, on the other hand, has been lukewarm to the joint bid proposal. North Korea also presents a dicey situation with its series of provocations and international sanctions that have followed. The country has never before hosted a major sporting competition such as the Olympics or the World Cup.

And even if the Asian countries join forces for a bid, they may not even be the favorites to win the right to host the event.

The 2030 tournament will mark the centenary of the inaugural World Cup in Uruguay, and the South American nation has a joint bid with its neighbor, Argentina, for the occasion.

England has strong backing from its continental federation, UEFA, for the 2030 bid. Since Russia will host the 2018 World Cup, Europe has been ruled out for the 2026 competition, and the UEFA has insisted it will be Europe's turn again in 2030.

World Cup hosts are generally selected six years in advance, though FIFA selected hosts for 2018 and 2022 editions in December 2010. 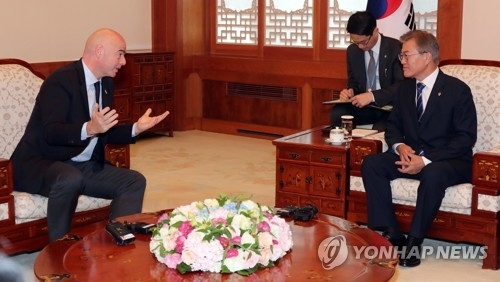