"As it is since the 1953 armistice, the dangers continue to this day, but so does the Republic of Korea-U.S. alliance and so does the freedom and prosperity of the ROK," the commander said in a dinner event to mark the launch of the Korea Defense Veterans Association (KDVA) and the Korea-U.S. Alliance Foundation.

It is thanks to "the role of those of who served in the ROK to make that so," Brooks said, honoring servicemen who served in South Korea during and after the 1950-53 civil war.

The KDVA, the fraternity association of former and current USFK servicemembers, was launched last month in Washington D.C. to bring together as many as 3.5 million members in the U.S. and South Korea. Retired Army Gen. Walter Sharp, who commanded the USFK from 2008 till 2011, is the first head of the association. 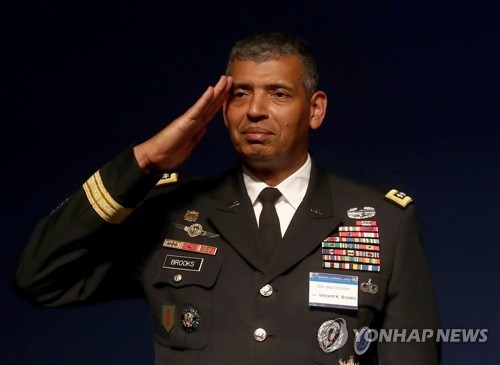 The foundation was launched in Seoul with the aim of financially supporting the KDVA.

"The association is for people who served -- men, women, soldiers, airmen, marine -- the Korean military, the U.S. military and the Korean Augmentation Troops to the United States Army. They all have something in common," he said. "It's their willingness to and their experience in defending the ROK."

The best way to remember their service is to create an association like this that will bring us together and make connections, he stressed.

"I look forward to being active" in the association, he said, after signing his name as the first member of the KDVA.

In the dinner meeting, Vice Defense Minister Suh Choo-suk also said, "What is important under the current grave security situation is the solid alliance and strong combined defense posture, the foundation for peace and stability on the Korean Peninsula." He expressed "special thanks" to Gen. Brooks and the USFK forces stationed here.