South Korea will take on Qatar at Jassim Bin Hamad Stadium in Doha on Tuesday in a key qualifying match for the 2018 FIFA World Cup. The kickoff is 10 p.m. Tuesday (local time) and 4 a.m. Wednesday in Seoul.

At a press conference held on the eve of the contest, Stielike said his players are prepared for a victory.

"As we move deeper into the qualification round, there is an increasingly less margin for error," the coach said. "Since we don't yet have a victory away from home, we'll try that much harder to win." 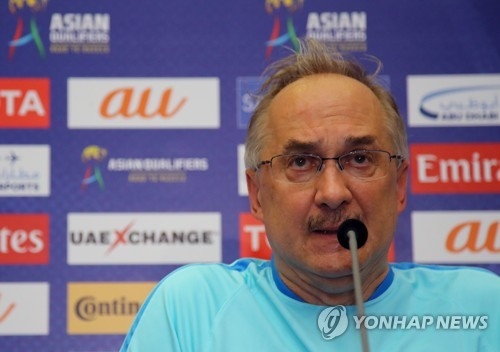 South Korea are currently in second place in Group A with 13 points on four wins, a draw and two losses. They're holding on to the last automatic qualification spot, one point ahead of Uzbekistan with one match in hand. South Korea have two losses and a draw on the road, and have yet to score away from home.

Iran clinched their World Cup spot earlier Monday with a 2-0 victory over Uzbekistan. A win over Qatar will take South Korea that much closer to their ninth consecutive World Cup berth and leave Uzbekistan four points back with two matches to play.

Only the top two nations from each of the two groups will directly advance to the World Cup, while the two third-place teams will have to go through playoffs.

Qatar have already lost their shot at automatic qualification, as they're stuck in last place in the group with four points, but Stielike said they're not to be taken lightly.

"If you look at their performances at home, they've been dangerous," he said. "Iran scored twice in second-half added time (to win 2-0) and Uzbekistan had to get a free kick goal (in their 1-0 victory) here. And since Qatar will host the 2022 World Cup, they won't back down so easily against us."

South Korea had a lethargic scoreless draw against Iraq in a tune-up friendly last week, in which they recorded no shots on net. Stielike said he has called on his players to take an aggressive approach against Qatar.

"Our offense will begin the moment our goalkeeper has the ball," he said. "And as important as our offensive tactics and formations may be, the key is for the players to have the right mindset."

Stielike said he has broken down each of Qatar's seven matches in the current qualifying stage, including South Korea's 3-2 win at home last October.

Captain Ki Sung-yueng said the players are in good form, despite scorching conditions in Doha.

"The conditions here may favor Qatar, but we aren't going to make that an excuse," Ki told reporters before a team practice at Jassim Bin Hamad Stadium. "We have to make sure to find open space. If we execute things that we've practiced, then we should have a good match tomorrow." 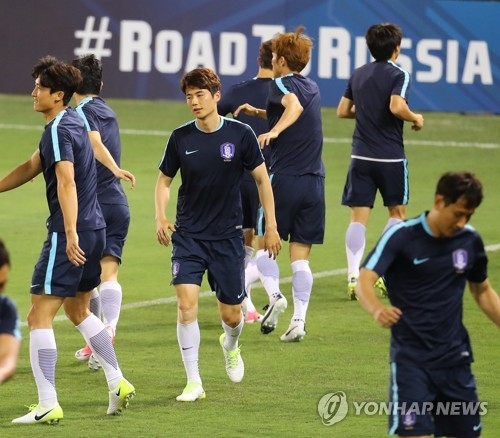