SEOUL, June 13 (Yonhap) -- President Moon Jae-in was set to hold a meeting with ruling and opposition party leaders of parliamentary committees Tuesday in the latest attempt to rally support for a supplementary budget currently opposed by the main opposition party.

The meeting will be held over lunch at the presidential office Cheong Wa Dae, according to officials there.

It is expected to involve chairs of all major committees, including the special committee on budget and audit, they said.

Ruling and opposition party secretaries of all committees have also been invited to the luncheon, but it was not clear how many would attend.

The main opposition Liberty Korea Party (LKP) has declared a boycott of the meeting, saying it will not be used in a show to make only one person look good.

Tuesday's meeting follows the president's state of the nation address delivered at the National Assembly. 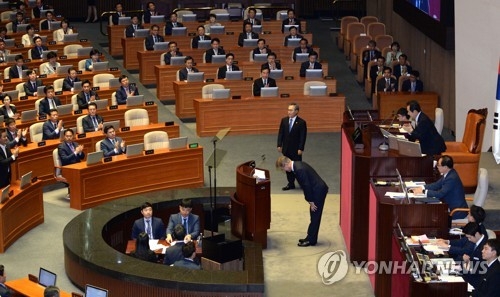 The government has submitted a request for an 11.2 trillion-won (US$9.89 billion) supplementary budget, which the president said will help create 110,000 new jobs.

The LKP insists devising a supplementary budget based on a need to create new jobs violates the National Finance Act, which stipulates an extra budget can be drawn up only in cases of war, massive natural disasters, economic recessions, mass unemployment or crucial changes in cross-border relations.

Moon, while addressing the nation Monday, argued current conditions in the job market represented a crisis that will lead to a nationwide disaster if left untouched.

Over the past nine years while the LKP served as a ruling party, the party and its two former conservative governments had devised an extra budget each year, often simply citing a need to increase spending to keep the economy from deteriorating.