SEOUL, June 13 (Yonhap) -- President Moon Jae-in renewed his request for the parliament to quickly approve a supplementary budget Tuesday, rallying support for the government's request in a meeting with ruling and opposition party lawmakers.

The meeting, held at the presidential office Cheong Wa Dae, was attended by 14 lawmakers -- the chairs of 10 parliamentary committees, including the special committee on budget and audit, and four party secretaries of the ruling and three minor opposition parties on the budget committee, according to Cheong Wa Dae officials.

"I invited you all to a meeting today to ask for your help to quickly review the government request for a supplementary budget at the parliamentary committees, so the budget can be executed in the second half of the year," the president told the lawmakers, according to Cheong Wa Dae spokesman Park Soo-hyun. 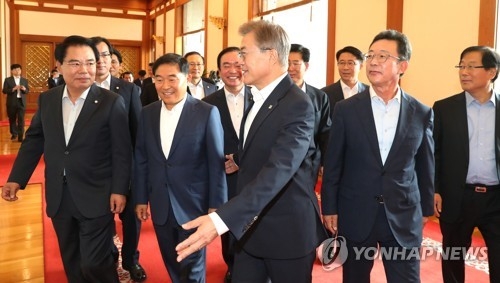 Tuesday's meeting came one day after the president stressed the need to allow one-time additional spending of the government to create up to 110,000 new jobs in his first state of the nation address delivered at the National Assembly.

"I ask you to lend your support, considering the fact that the extra budget can be devised without having to issue new Treasurys or increase tax rates, and that it can help boost the slumping economy by increasing local spending," the president was quoted as saying.

The meeting, however, also came amid the main opposition party's apparently continued objection to the government-proposed extra budget.

The LKP insists devising a supplementary budget based on a need to create new jobs violates the National Finance Act, which stipulates an extra budget can be drawn up only in cases of war, massive natural disaster, economic recession, mass unemployment or crucial changes in cross-border relations.

Moon, while addressing the nation Monday, argued that current conditions in the job market represented a crisis that will lead to a nationwide disaster if left untouched.

LKP lawmakers, while present, showed no support for what Moon had to say. Most also remained seated as the president exited the premise, while most ruling and minor opposition party lawmakers stood in respect.

The main opposition party had also said it would boycott Tuesday's meeting with the president, saying it had no intention of being used in a show that it said was designed to make only one person look good.