SEOUL, June 13 (Yonhap) -- NBA Hall of Famer Dennis Rodman is expected to arrive in North Korean on Tuesday amid heightened tensions between the United States and Pyongyang, a news report said.

Former U.S. basketball star Rodman was spotted at Beijing International Airport, with his trip to North Korea coming at a time when North Korea is detaining four Americans, according to CNN.

The purpose of his visit to North Korea is unknown, but CNN said that the U.S. State Department says he is not going to visit the North in any official U.S. capacity.

In February 2013, Rodman visited North Korea and met leader Kim Jong-un, known as an avid basketball fan. Since then, he visited the North on several occasions for what could be seen as "basketball diplomacy." 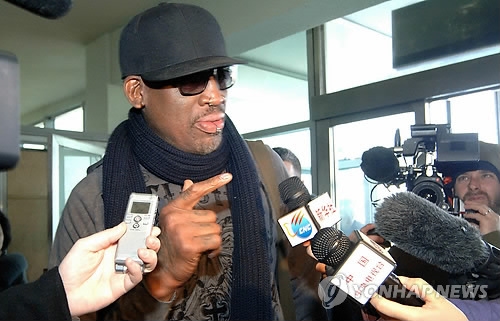