SEOUL, June 13 (Yonhap) -- LG Display Co., the world's largest maker of liquid crystal display (LCD) panels, has maintained its No. 1 spot in shipments of large LCD and OLED panels for the 30th consecutive quarter, according to an industry report Tuesday.

LG Display, which has been the world's top maker of LCD TV panels since the fourth quarter of 2009, kept the top spot with the shipment of 35.42 million units, which comes to a 21.4-percent share in the 9-inch or larger panel market, the report by IHS Markit showed.

China's BOE Technology Group came in second with a 21-percent share, followed by Taiwan-based AUO and Innolux with 16.4 percent and 16.2 percent, respectively.

LG Display took the dominate position in the UHD LCD TV monitor and other TV panel markets with a share of between 21 percent and 29 percent, the report showed.

The report said that global shipments of large panels fell 8 percent in the first quarter from three months earlier to 165 million units. 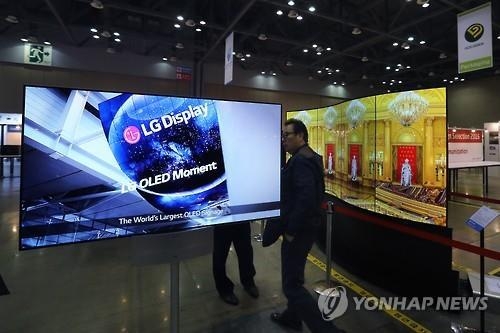