SEOUL, June 13 (Yonhap) -- South Korean securities companies have considerably reduced the number of their overseas branches over the past six years due mainly to their unprofitability, data showed Tuesday.

Thirteen local brokerages had a combined 57 overseas branches as of the end of March, compared with 89 branches six years earlier, according to the data from the Financial Supervisory Service and the Korea Financial Investment Association.

About a decade ago, South Korean securities companies began to tap into foreign countries in a bid to find new sources of revenue as the domestic stock market became saturated.

The number, however, had been on the decline since peaking at 89 in 2011, with the figure reaching 62 at the end of last year. 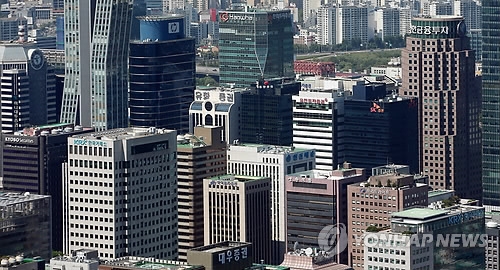 Industry watchers attributed the decline to their unprofitability, difficulties competing with large global investment banks and local brokerages' lack of idle funds to be used in honing the competitiveness of overseas branches.

"Overseas branches of South Korean securities firms had difficulties turning a profit because of their short history," an industry source said. "On top of that, they had to vie with such industry giants as Merrill Lynch and JP Morgan."

Local brokerages also lacked money to invest in their overseas branches as the benchmark Korea Composite Stock Price Index (KOSPI) remained range-bound after reaching a peak in May 2011, making a dent in their fee income, according to the watchers.

Over the cited six-year period, South Korean securities firms saw the number of their domestic branches tumble more than 40 percent to 1,142 as of end-March due mainly to a jump in mobile stock trading.

Meanwhile, local brokerages had a combined workforce of 35,824 at the end of March, down 7,540 from six years earlier.
(END)