SEOUL, June 13 (Yonhap) -- Three opposition parties on Tuesday voiced their disapproval for a 11.2 trillion-won (US$9.9 billion) extra budget bill aimed mainly at creating jobs in the public sector, reiterating it does not meet legal requirements.

The move came a day after President Moon Jae-in made an emphatic call for parliamentary support for the bill, saying "unemployment, if left unattended, could lead to a crisis equivalent to national disaster."

During their talks, the policy chiefs of the Liberty Korea Party, People's Party and Bareun Party agreed that the bill conflicts with the National Finance Act, which stipulates an extra budget can be drawn up in such cases as massive natural disasters, economic recession, mass unemployment and crucial changes in cross-border relations.

However, the ruling party and government see the current situation as posing risks of mass unemployment.

"In particular, we shared the view that we cannot agree to the supplementary budget aimed at creating public service jobs with taxpayers' money, which will impose a permanent burden on the future generations," the three policy chiefs said in their joint statement.

The extra budget is a major tool for Moon to deliver on his election pledge to create 810,000 jobs in the public sector during his five-year term that ends in 2022.

The passage of the bill requires consent from a majority of the lawmakers present for a vote that can be set up by half of all 299 lawmakers. The ruling Democratic Party holds only 120 seats, far short of a majority. 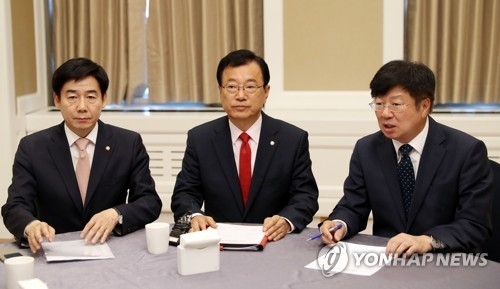