SEOUL, June 13 (Yonhap) -- A university professor was injured from an unidentified blast that went off from a parcel delivery, the police said Tuesday.

The explosion occurred in the professor's office located at an engineering faculty building of Yonsei University in western Seoul around 8:41 a.m., according to the police.

A military bomb squad has been sent to the site on the possibility of a terror attack. The police also sent a special operations squad to the scene.

The professor, identified only by his surname Kim, has suffered minor burns on his neck, chest and hands, and is being treated at a nearby hospital. Kim teaches architecture at the university.

Kim told the police that he found a box in a shopping bag hanging on a door knob, and it "suddenly exploded when I opened it."

Witnesses at the scene also told the police that a parcel went off suddenly, and they saw "small bolts shoot out" of the box.

A team of some 70 police officers from a bomb squad and crime lab are working at the scene to find out the exact cause of the incident and analyze the explosive device, the police said. They have cordoned off the area.

"So far, we believe that the explosion occurred from one side of the parcel, and the explosives are presumed to have been clumsily made," a police officer said. 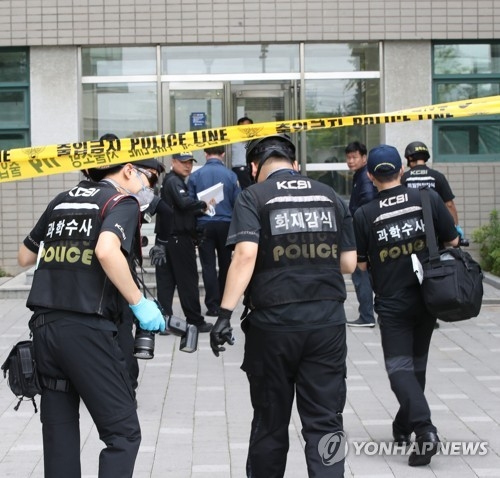