"I'm closely watching property price trends especially in some regions like Seoul," Finance Minister Kim Dong-yeon said in a meeting with other ministers. "I want to make clear that I will not tolerate real estate speculation."

Kim's comments are in line with the government's recent move to strengthen regulations on mortgage loans as the local property market has been experiencing a price surge in apartments in certain areas.

Market insiders expect that the new finance minister may be considering a move to tighten a set of borrowing rules that allow home buyers to borrow up to 70 percent of their property value or 60 percent of their income for mortgage payments.

He said he will come up with tailored plans to cool down the overheated market and crack down on any illegal property speculation practices.

The country's top economic policymaker, who took the helm of the finance ministry last week, also said Seoul is prepared for the scheduled rate hike by the U.S. Federal Reserve later this week.

"It's highly likely that the U.S. Federal Open Market Committee will raise the key rate," said Kim. "We have to prepare appropriate market stabilizing measures in accordance with the set contingency plan." 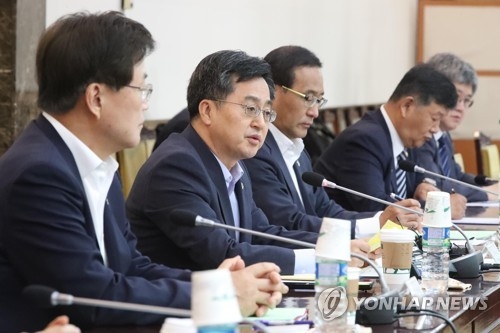