SEOUL, June 13 (Yonhap) -- South Korea and the United States held a meeting on Tuesday to make preparations for their next round of high-level talks on defense and security issues, the foreign ministry said.

The meeting took place in Seoul between Acting Assistant Secretary for Arms Control, Verification and Compliance Anita Friedt and her South Korean counterparts, according to the ministry.

The closed-door meeting was aimed at making preparations for the next Extended Deterrence Strategy and Consultation Group (EDSCG) talks. 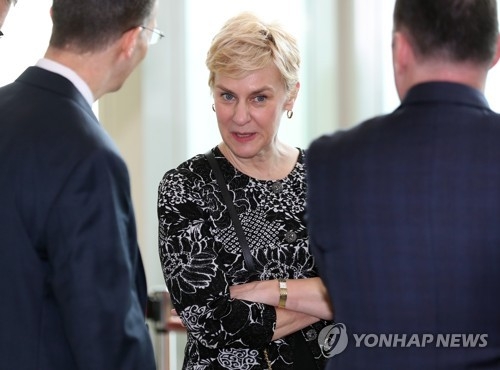 The EDSCG was launched in October to ramp up discussions between the allies on security and defense issues. Its first meeting was held in Washington in December.

Friedt's trip to Seoul will likely focus on fine-tuning the timetable and other details for the next EDSCG dialogue but the ongoing controversy over the deployment of the U.S. missile defense system called "THAAD" in South Korea could also be discussed, observers said.

South Korea recently suspended the deployment of a Terminal High Altitude Area Defense (THAAD) battery which had been under way for months, citing the need for a survey on its environmental impact.