SEOUL, June 13 (Yonhap) -- Despite a 2015 deal between South Korea and Japan to end a bilateral feud over colonial-era sexual enslavement, its South Korean victims still have individual rights to sue the Japanese government for compensation, Seoul has recently concluded.

The government submitted the position to the Seoul Central District Court in late April upon the court's order to define the legal effectiveness of the agreement signed in December 2015.

The court was dealing with a civilian suit filed by 12 South Korean victims of Japan's wartime sexual enslavement, who wanted the government to indemnify Japan for psychological and material damage incurred by the so-called comfort women deal.

In a written response to the court, the government said, "The comfort women deal does not override the victims' individual rights to claim indemnity," according to a source close to the plaintiffs.

The deal had called for the two governments to put the issue to an end "for good and irreversibly," with Japan paying 1 billion yen (US$9.1 million) to financially assist the victims.

Still, the government said in the court response that the deal is a political agreement that is not legally binding, but it should still be abided by because it is a promise between states, according to the source.

Then, the court again ordered the government to state what government steps would be taken to help the victims claim their indemnity, the source also said.

The government is reportedly weighing whether or not it will uphold the controversial deal with Japan since liberal President Moon Jae-in took power last month.

Moon has said most South Koreans do not approve of the deal, hinting at a possible renegotiation of the bilateral issue.

In light of the uncertainty, the court delayed its ruling by one month to early July at the request of the government. 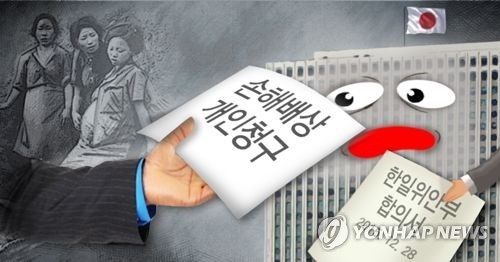 The Ministry of Foreign Affairs confirmed the court correspondence later in the day.

"The government's position remains unchanged that the Japanese military's comfort women victim issue has been settled by the 1965 treaty between South Korea and Japan," ministry spokesman Cho June-hyuck said in a press briefing.

Under the treaty, the two countries normalized their diplomatic relationship following Japan's colonial control of the Korean Peninsula from 1910-45. Japan claims all legal issues stemming from the colonization were settled in the treaty, but South Korea insisted the comfort women issue should be handled separately as it constitutes a crime against humanity.

"The new administration's stance on the comfort women agreement is consistent. The government hopes to solve the issue wisely through joint efforts of the two countries, acknowledging the reality that the majority of our public do not approve of it sentimentally."