SEOUL, June 13 (Yonhap) -- National Assembly Speaker Chung Sye-kyun vowed Tuesday to strive for predictability and transparency in the process of rewriting the decades-old Constitution, voicing hope that a parliament-led revision will be completed within his term that ends next June.

During a press conference marking his first year in office, Chung also said that during the remainder of his two-year term, he would push to foster "constructive" cooperation among the ruling and opposition parties, and focus on handling bills aimed at enhancing people's livelihoods.

"I will try to ensure that the revision will be made together with citizens by transparently disclosing its content, timetable and procedures," Chung told reporters.

"I will also give my active support to the parliament's special panel on constitutional revision to make sure that our debate on the amendment will not be swayed by other political issues," he added.

Political parties largely agree that the revision of the 1987 Constitution is necessary to address the current concentration of powers in a single national leader, which has long been blamed for corruption and political polarization. But they differ on how to alter it.

Most parties agree that a national referendum on the revision should be timed to coincide with the local gubernatorial and mayoral elections slated for next June.

During the press meeting, Chung also stressed his role in encouraging communication and cooperation in a multiparty political landscape.

"To smoothly lead the multiparty legislature, dialogue and compromise is needed," he said. "Through 'cooperative governance,' I will seek to overcome differences and expand the depth of understanding about one another."

Cooperative governance has been a crucial task for the Moon Jae-in government facing an opposition-led parliament. Moon's Democratic Party controls only 120 seats in the 299-member legislature, necessitating opposition backing for passing any contested bills.

Chung also underscored the need for inter-party cooperation in dealing with bills to revitalize the economy.

"We cannot emphasize the importance of livelihood issues," he said. "I will pay particular attention to addressing youth unemployment." 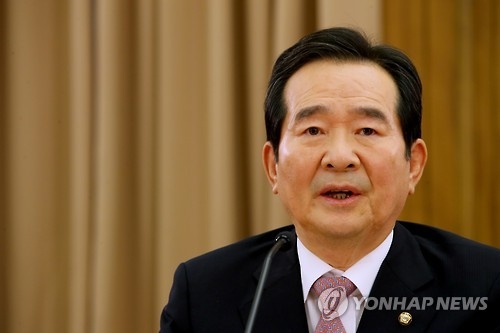