"It is a great pleasure to be at the ROK-U.S. Combined Forces Command for the first time since taking office," Moon was quoted as saying. "I want to applaud service members for the great job and critical role in deterring enemy aggression." 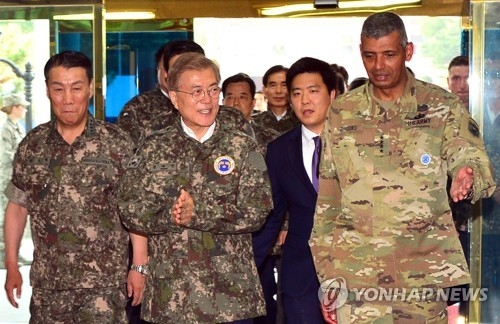 In response, the CFC chief stressed the importance of a robust alliance between the two countries.

"During this time of heightened tensions it is more important than ever to stand with our Korean brothers," Gen. Brooks said. "The special relationship between the U.S. and the ROK (South Korea) was forged by our grandfathers and we will continue their legacy of steadfast commitment regardless of what the future brings."

He was apparently referring to American troops' participation in the 1950-53 Korean War to help the South fight against the invading North.

The conflict ended in a truce, not a formal peace treaty. As a legacy, around 28,500 U.S. soldiers are stationed in South Korea.

The CFC is the top wartime command for the allies as it would have operational control over the combined forces in the event of an North Korean attack.