The presidential office Cheong Wa Dae said the president could not waste any more time, citing what it called a serious economic crisis. 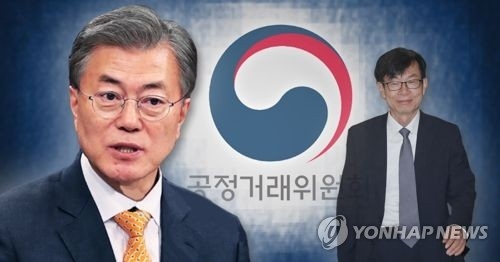 The parliamentary hearing committee initially had until last Wednesday to publish a report on the outcome of the hearing. It failed to do so due to opposition parties refusing to endorse Kim as the new head of the antitrust watchdog.

Parliamentary approval is not required for the appointment of a new FTC chief, but the president, apparently hoping to win the parliament's blessing for his pick, again asked the committee to issue its report by Monday. The committee failed again.

"As you all know, the people's lives are being threatened under extreme economic inequality. As the president noted in his state of the nation address, we must build a fair economic democracy under fair competition. We cannot continue wasting time," Moon's chief press secretary Yoon Young-chan said at a press conference.

Kim's appointment, though possible without parliamentary approval, is expected to put a strain on Cheong Wa Dae's relations with the opposition-led parliament.

The main opposition Liberty Korea Party (LKP) strongly condemned the appointment, calling it a "slap in the face."

"We cannot help but accept the appointment as a declaration that the president would renounce efforts to foster cooperation (with the opposition bloc)," said Chung Woo-taik, the LKP floor leader, told reporters.

The LKP has noted the possibility of boycotting the ongoing parliamentary session, which could effectively prevent the legislation of bills on the supplementary budget and government reorganization, let alone the appointment of other Cabinet members and ranking government officials.

The minor People's Party expressed regrets over Kim's appointment, saying that there should not be another case of the president pressing ahead with disputed high-level appointments.