SEOUL, June 13 (Yonhap) -- South Korea's foreign ministry said Tuesday that it cherishes its relations with Vietnam and wants to advance the ties further in its response to an outcry from the country following President Moon Jae-in's recent remarks on the Vietnam War.

In his speech on June 6 marking Memorial Day, Moon said that the contributions made by South Korean soldiers during the Vietnam War helped bolster the economy here.

The Vietnamese foreign ministry voiced its displeasure with the president's comments, calling for the Seoul government on Friday to refrain from making comments that could hurt the feelings of its people.

"Since 1992 when the two established diplomatic ties, we have continued to work to advance the relations with a shared belief that we should set aside the past and look forward.... We will keep working to advance friendly ties going forward," he added.

Cho noted that Moon's comment related to the Vietnam War was intended to remind of the need to provide "appropriate" support for those who sacrificed their lives at the order of the country.

South Korea, which fought against Vietnamese communists during the 1960-1975 Vietnam War, is accused of killing many innocent civilians in Vietnam while carrying out operations during the war. About 5,000 South Korean soldiers died in the war.

It remains a sensitive issue for the two countries despite their expanded exchanges in diverse areas for the past 25 years since they built diplomatic ties. 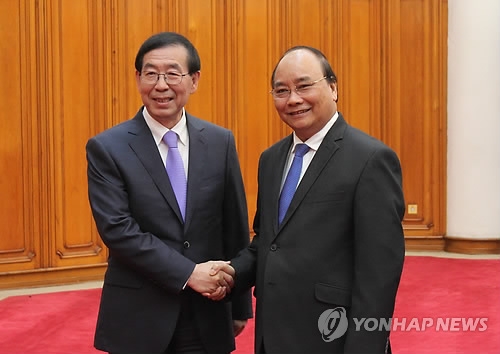