ULJU, South Korea, June 13 (Yonhap) -- The Ulju municipality in southeastern South Korea held a ceremony on Tuesday to mark a 100-day countdown to this year's film festival on mountains and mountaineers.

The Ulju Mountain Film Festival (UMFF), the second of its kind in the country, is scheduled to run for five days starting from Sept. 21 in the town of Ulju next to the Yeongnam Alps, a group of tall mountains in the Yeongnam region of southeastern South Korea.

During the ceremony, Ulju County chief Shin Jang-yeol, who serves as head of the UMFF organizing committee, said the municipal government "will make efforts to make the festival known across the world and help the country's people get happy with culture." 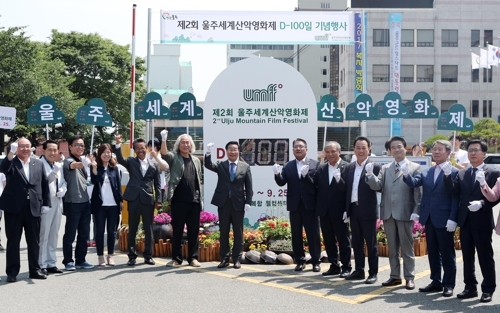 The UMFF organizing committee has established a cultural award involving various aspects of mountains for the first time in the world as part of events to promote the event.

The award, known as the Ulju Mountain Culture Award 2017, will go to U.S. environmentalist and mountaineer Rick Ridgeway, 68, who has provided great inspiration for mountaineers worldwide by climbing new routes and exploring little-known regions on six continents.

According to the organizing committee, Ridgeway will make a three-day visit to Ulju from Sept. 21 to meet with his local fans though a variety of activities including a lecture and an exhibition.

The inaugural UMFF, held from Sept. 30 to Oct. 4 last year, brought together a total of 182 movies from 40 countries with 78 of the movies from 21 countries shown.