SEOUL, June 13 (Yonhap) -- The nominee for South Korea's unification minister on Tuesday raised the need to resume operations at a joint industrial complex which has been suspended since North Korea's nuclear and missile tests in 2016.

Earlier in the day, President Moon Jae-in named Cho Myoung-gyon the country's top point man on unification. He is a former presidential aide who played a key role in preparing for an inter-Korean summit in 2007 under former liberal President Roh Moo-hyun. 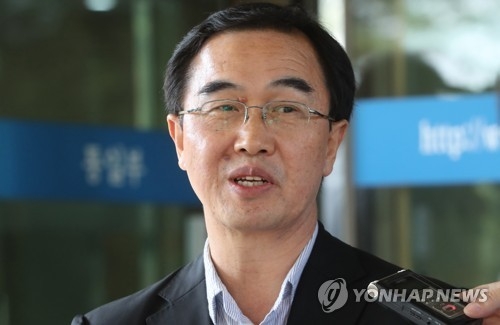 "(I think that) holding an inter-Korean summit can be pushed to improve the two Koreas' relations and resolve other issues on the Korean Peninsula if needed," he said.

Suh Hoon, South Korea's spy chief, earlier struck a similar note over the need for a third summit. In 2000, the two Koreas held a historic summit, followed by another in 2007.

"I can say it is too early to speak of an inter-Korean summit meeting. Still, we need to hold such a summit." he said on May 10 after his nomination.

Cho, 60, served as a secretary to former liberal President Roh in 2006-2008, after working at the unification ministry.

In August 2007, he accompanied then South Korean spy chief Kim Man-bok on a secret visit to North Korea for the summit.

Cho was also at hand during the summit to transcribe the leaders' talks and was involved in fine-tuning the wording of the summit declaration.

He told reporters that inter-Korean relations have been strained due to multiple factors -- North Korea's nuclear and tests, the international community's response and a change in public sentiment toward North Korea.

"If I becomes the unification minister, I will do my best in resolving North Korea's nuclear issue, improving ties and bringing peace to the peninsula," Cho added.