During the meeting at the presidential office Cheong Wa Dae, Moon said Belgium's past role in European integration would give a lesson to South Korea in its diplomatic efforts for international cooperation to solve North Korea's nuclear issue, his office said.

He also expressed hopes to further boost trade between the two countries which has increased following the South Korea-EU Free Trade Agreement.

Moon asked the princess to attend the Winter Paralympics to be held in Pyeongchang in February 2018. She is on the honorary board of the International Paralympic Committee.

Princess Astrid arrived here on Saturday leading a 258-member business delegation. It is a Belgian economic mission's first visit to Seoul since 2009.

Since 2013, Princess Astrid has led economic missions on behalf her brother King Philippe. She is scheduled to return to Belgium on Saturday. 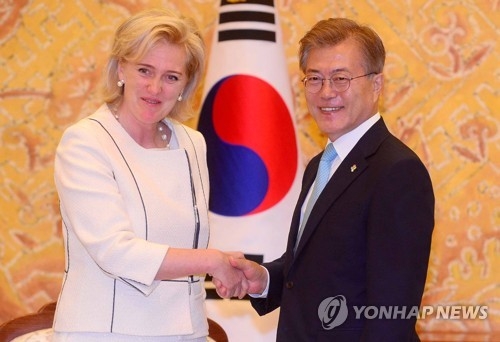