WASHINGTON, June 13 (Yonhap) -- The American student just freed from a long detention in North Korea is in a coma, his parents were quoted as saying Tuesday, a surprise that could further complicate the already tense relations between the two countries.

The North first informed the U.S. Monday last week that Warmbier is in a coma, and President Donald Trump was immediately informed of the fact and ordered his medical evacuation, according to the Washington Post. The U.S. special representative for North Korea policy, Joseph Yun, traveled with doctors to Pyongyang on a military medical plane to bring Warmbier home, the report said.

On Tuesady morning, Tillerson reported to Trump that Warmbier is on the way home, and the last instruction Trump gave was: "Take care of Otto," the paper quoted a senior administration official as saying. 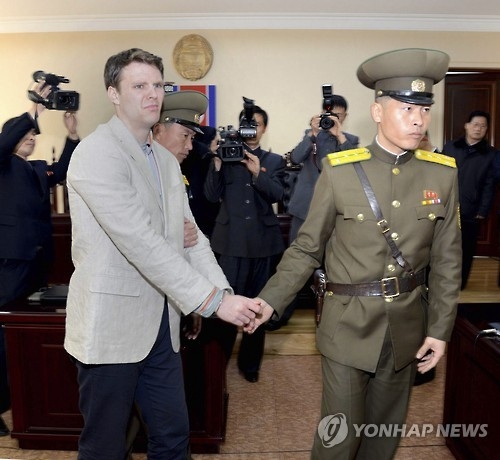