WASHINGTON, June 13 (Yonhap) -- The United States will seek to deny North Korea crude oil supplies and other basic needs in an effort to ramp up pressure on the regime over its nuclear and missile programs, U.S. Secretary of State Rex Tillerson said Tuesday.

"We're going to have to move to work with others to begin to deny North Korea basic needs like crude oil supplies, petroleum fuel supplies, things that are fairly or at least easier ... to monitor whether we're getting cooperation with people or not," Tillerson said during a Senate Foreign Relations Committee hearing.

Tillerson said the U.S. is firmly determined to tighten the screws on Pyongyang.

"There is not a bilateral discussion I have with any government anywhere in the world, whether it's in Eastern Europe, Southeast Asia or Central and South America that we do not talk about their relationship with North Korea and asking them to examine all of those ties and even when they said, 'Oh we only have 5 million dollars worth of business, I say 'Make it two,'" he said.

Tillerson said the U.S. is moving toward taking secondary sanctions on countries cooperating with the North.

Asked if China is living up to its promise to increase pressure on Pyongyang, Tillerson said that Beijing has "taken steps, visible steps." Tillerson also said the U.S. is discussing with Beijing Chinese entities possibly violating North Korea sanctions.

Increasing pressure on the North will be the first topic for next week's high-level talks between the U.S. and China, he said. 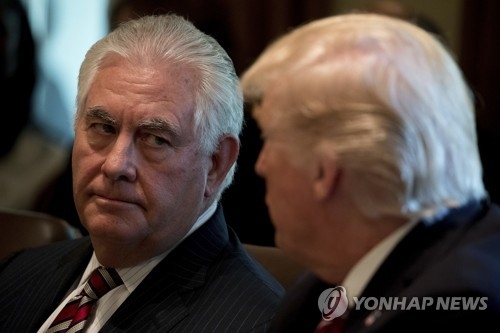