Hassan Al Haydos scored twice and set up another at Jassim Bin Hamad Stadium, where South Korea submitted yet another listless effort at both ends.

South Korea are still winless away from home, with three losses and a draw.

With two matches remaining in the final Asian qualifying round for the 2018 FIFA World Cup, South Korea are in second place in Group A, the last spot for automatic qualification, with 13 points from four wins, a draw and three losses.

South Korea will next face Iran at home on Aug. 31, and travel to Tashkent to close out the qualification stage against Uzbekistan on Sept. 5. 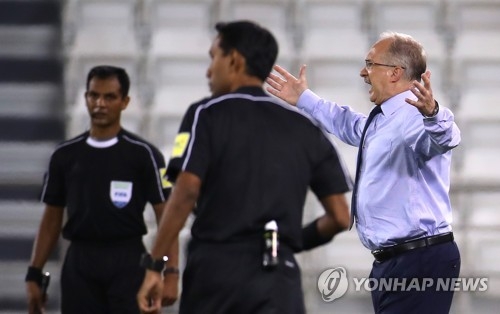 Son was later diagnosed with a broken forearm. He'll be in cast when he returns home later Wednesday for further examinations.

South Korea head coach Uli Stielike has been on the hot seat since last fall, when a string of uninspired matches began. The Korea Football Association (KFA) gave him a vote of confidence in April despite growing calls for Stielike's head, and in light of this loss, the KFA will be under even more pressure to sack the German-born bench boss. 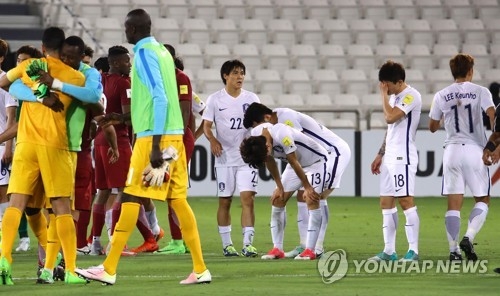 Stielike said after the match his job status is "not in my hands" and added he will talk further about the situation after he returns to South Korea.

"We had hope and worked hard, but it's a pity that we got this result," he said. "The coach decides the players and tactics, so I should take the responsibility. We struggled from the start and since we had a hard time securing the ball, we had a tough match."