Son injured his right wrist in South Korea's 3-2 loss to Qatar in the final Asian qualifying round for the 2018 World Cup at Jassim Bin Hamad Stadium in Doha.

With South Korea trailing 1-0, Son fought for the ball in the air against Qatari defender Mohammed Musa, but landed awkwardly. He failed to stand up for a few minutes before walking off the field with the medical staff's help.

Son eventually had to be taken out from the match as head coach Uli Stielike put Lee Keun-ho in his position in the 34th minute.

An official with the Korea Football Association (KFA) said Son could have suffered a fracture in his wrist and added, "Son may not travel with the national team and stay in Doha for treatment."

The men's team was scheduled to return to South Korea on Wednesday. 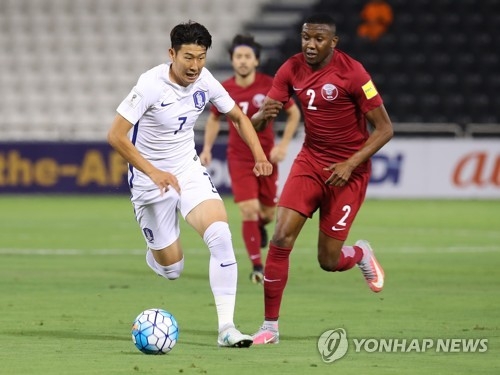