With South Korea trailing 1-0, Son got up in the air to battle defender Mohammed Musa for the ball in the 30th minute but landed awkwardly on his right arm. He stayed down on the pitch for a few minutes in visible pain, before walking off the field with the medical staff's help.

Son was seen holding his right wrist, as he was eventually replaced by Lee Keun-ho.

The Korea Football Association (KFA) at first suspected a broken wrist, but an official there announced after the match that Son had a fractured forearm.

The KFA considered keeping Son in Doha for further treatment, but he will end up traveling with the rest of the team in a cast Wednesday. He will undergo further tests in South Korea, according to the KFA.

Son, coming off a 21-goal season for the Spurs, is one of South Korea's most dangerous offensive players. He had 17 goals in 53 international matches before Tuesday.

Following the latest loss, South Korea remained stuck at 13 points from four wins, one draw and three losses, good for second place in Group A in the ongoing qualifying round. Iran, with 20 points, have already bagged a World Cup spot, while Uzbekistan are just one point behind South Korea. All countries have two matches remaining apiece.

Only the top two nations from Groups A and B earn automatic berths in the 2018 World Cup in Russia. Third-place teams have to go through a playoffs for a chance to play in the quadrennial event. 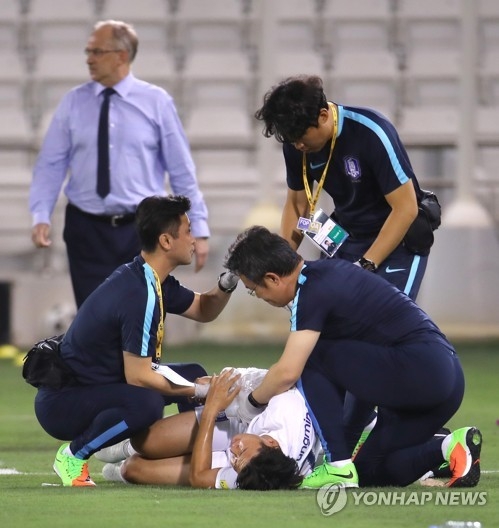