Once again hurt by shoddy defense and aimless offense, South Korea went down 2-0 before an hour was up. They rallied with two straight goals, scored eight minutes apart in the second half, before Qatar got the go-ahead goal in the 74th to stun the visitors at Jassim Bin Hamad Stadium.

With two matches remaining in the ongoing qualification round, South Korea are stuck at 13 points from four wins, one draw and three losses, good for second place, or the last automatic qualification spot, in Group A. Iran have already secured their berth with 20 points, thanks to a 2-0 win over Uzbekistan on Monday. 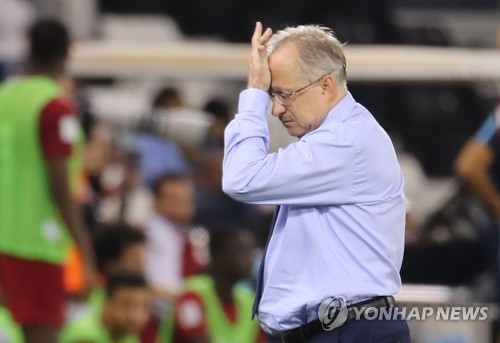 Uzbekistan are breathing down the South Korean neck at 12 points.

The top two nations from Groups A and B will earn automatic berth at the 2018 World Cup in Russia, while two third-place teams must go through playoffs.

South Korea fell to Iran 1-0 in Tehran last October, and eked out a 2-1 win over Uzbekistan at home in November.

South Korea have not beaten Iran since January 2011, and have dropped the past four head-to-head matches, all by the scores of 1-0. Unless South Korea can get their act together in a hurry, they'll be hard pressed to get past Iran, which means their World Cup fate will likely be determined in the final qualifying match against Uzbekistan.

After Uzbekistan's loss to Iran, South Korea, world No. 43, had the opportunity to give themselves some much-needed breathing room with a win or even a draw against Qatar, ranked 88th.

Yet Qatar, ranked last in Group A with just one win, played with more desperation and controlled abandon of a team with nothing to lose. The South Koreans often appeared flustered as their opponents were quicker to the loose ball and won one individual battle after another.

Qatar's first two goals were both direct results of terrible defense. Hassan Al Haydos got the opening goal on a free kick, after defender Choi Chul-soon committed a foul on Akram Afif just outside the box following a defensive zone turnover.

Afif and Al Haydos played a give-and-go for a 2-0 lead early in the second half, and South Korean defenders ended up being spectators to the pretty play and gave Afif a lot of real estate in the box.

Though Ki Sung-yueng and Hwang Hee-chan scored consecutive goals to tie the game, the South Korean offense still had trouble finishing around the net. It has been a chronic issue for the squad, and South Korea will stand little chance of beating either Iran or Uzbekistan with that kind of effort.

And the blame will once again find its way toward head coach Uli Stielike. 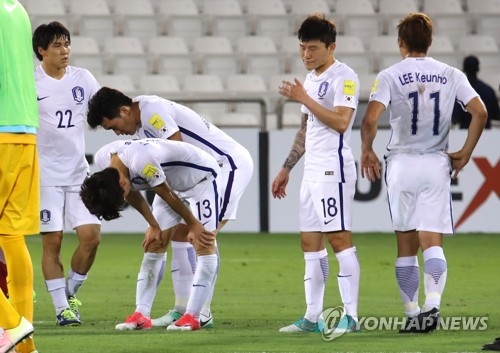 It bears watching what the Korea Football Association (KFA) will now do with the German-born coach. It gave him a vote of confidence two months ago, despite growing calls for his head following a 1-0 loss to China and an utterly uninspired 1-0 win over Syria in March.

The KFA instead chose to bring in a new assistant coach, and said it was a risk trying to replace the bench boss so late in the final World Cup qualification stage.

And this loss clearly wasn't the type of response that the KFA or disgruntled fans had expected from the coach, who has had to deal with questions ranging from his tactical acumen to his ability to communicate with his players effectively.

In his post-match press conference, Stielike all but acknowledged his job was in danger, saying his future "is not in my hands to decide." Stielike said he will talk about the situation further once he returns to South Korea later Wednesday.

The biggest knock against Stielike has been his disinclination to adjust formations against different opponents. He actually tinkered a bit in a tune-up match against Iraq last week with a back three system, but South Korea ended up in a scoreless draw in which they recorded zero shot on target.

There are also apparent signs that Stielike has lost his locker room.

Stielike has at times thrown his players under the bus in the media, once lamenting that he wished he had a forward like Qatari striker Sebastian Soria to lead the attack. After getting past Syria 1-0 three months ago, Stielike said the players didn't execute what they were supposed to do.

Then after the Iraq match, midfielder Lee Jae-sung was openly critical of the back three setup, saying the team would be better off sticking with the more familiar, back four system.

After Tuesday's loss, Stielike put the blame squarely on his shoulders.

"The coach decides on the players and tactics, so I should take the responsibility," he said. "We struggled from the start and since we had a hard time securing the ball, we had a tough match."

Stielike also said South Korea did a poor job with help defense, especially after they started pushing forward with the score even at 2-2.

The coach clearly doesn't have enough trust in his own players, and the players in turn aren't buying into what the coach is trying to do. It all led to passive plays on the pitch against Qatar, and to a defeat that may well end up costing South Korea a shot at the World Cup.