DOHA, June 14 (Yonhap) -- South Korea national football coach Uli Stielike said Wednesday his future on the bench is "not in my hands" after a stunning defeat to Qatar in the FIFA World Cup qualifying campaign, hinting at his tenuous job status.

South Korea fell 3-2 to Qatar in the final Asian qualifying round for the 2018 World Cup at Jassim Bin Hamad Stadium in Doha on Tuesday. With only two matches remaining in the final round, South Korea did maintain second place in Group A, the last spot for automatic qualification, with 13 points from four wins, a draw and three losses, but failed to extend the lead over No. 3 Uzbekistan.

The Uzbeks are just one point back of South Korea. Only the top two nations from each of the two groups in this stage earn automatic World Cup berths, while third-place teams must go through a playoffs. Group leaders Iran have already clinched a World Cup spot with 20 points.

Stielike has been on the hot seat since the final qualifying round began in September 2016 as a string of uninspired matches continued. South Korea have yet to collect a win away from home in this final round as they mark three losses and one draw.

Stielike said he knows that people will ask questions about his status, as fans will push the Korea Football Association (KFA) again to ax him. But the German added he will give an answer on the issue once the squad lands in South Korea later Wednesday.

"I can't give the answer (on my status) at this moment," Stielike said after the match. "It's not in my hands to decide. I will talk about it once we return to South Korea."

Stielike, who took over the men's national football team in September 2014, rued South Korea's latest defeat in the Qatari capital.

"We had hope and worked hard, but it's a pity that we got this result," he said. "Defender Hong Jeong-ho was supposed to start and an injury to Son Heung-min affected the match result, but I won't make excuses."

Hong failed to start against Qatar due to his physical condition, while Son was replaced by Lee Keun-ho after 30 minutes due to a forearm injury.

Stielike said he will take the responsibility for the disappointing result.

"The coach decides the players and tactics, so I should take the responsibility," he said. "We struggled from the start and since we had a hard time securing the ball, we had a tough match."

Stielike's side in the second half leveled the score at 2-2, with goals from Ki Sung-yueng and Hwang Hee-chan but came up short of a come-from-behind win as Hassan Al Haydos scored his second goal of the night in the 74th minute.

"We had a better game in the second half and went for a third goal by pressing the opponents," he said. "But too many players moved forward in that process, and they failed to cut Qatar's offense and help the teammates at the back."

South Korea will next face Iran at home Aug. 31 and travel to Tashkent to close out the qualification stage against Uzbekistan on Sept. 5. 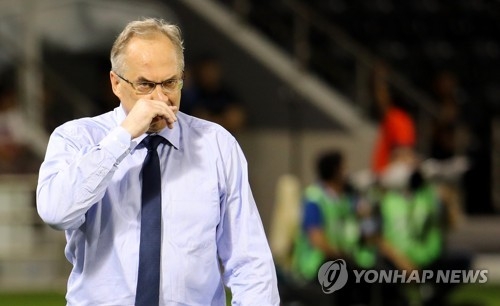