SEOUL, June 14 (Yonhap) -- President Moon Jae-in said Wednesday that he will seek to craft a constitutional ground to institute an apparatus for regular dialogue with provincial administrative chiefs, in a move to strengthen local autonomy and bolster cooperation with regional governments.

During a meeting with 17 provincial and metropolitan leaders, he said he would ensure a constitutional amendment likely next year that includes a clause aimed at enhancing the powers of local administrative units. The government is pushing for a referendum on a constitutional revision in tandem with the local elections slated for June 2018.

"When we hold (the referendum on) the revision next year, (we) will seek to craft a constitutional clause to strengthen decentralization and grounds to establish the 2nd Cabinet meeting," Moon said. 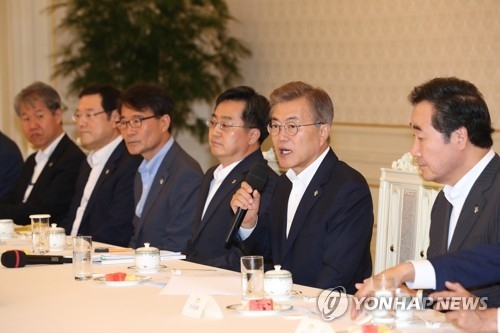 During his presidential campaign, Moon pledged to create a "second Cabinet meeting" that involves the heads of major provincial governments, in a bid to foster closer cooperation with them. The installation of the dialogue apparatus requires a law revision, officials said.

Before the revision, Moon said he would hold a meeting with the provincial leaders more often or on a regular basis.