SEJONG, June 14 (Yonhap) -- The head of South Korea's antitrust watchdog said Wednesday that he will do his best to protect social and corporate underdogs in a way that enhances fair market competition.

"The competition law is aimed at protecting competition in the market, but society is calling on the Fair Trade Commission (FTC) to play a different role," FTC Chairman Kim Sang-jo said in his inauguration speech in Sejong, a government administrative city some 130 kilometers southeast of Seoul. "I will never hesitate in enforcing fair competition rules and never step back."

Kim, a former civic activist who advocated for minor shareholders' rights, was appointed the head of the corporate watchdog by President Moon Jae-in despite strong protest from opposition parties. He is regarded as a pivotal figure to spearhead Moon's pledges to reform major conglomerates.

He said he will put policy priority on keeping large business groups from abusing their market dominance and protecting small-time businesses that have been marginalized from those with power in the fierce and somewhat unfair market environment.

Kim earlier said that he will strengthen punishment against "funneling of business" practices within conglomerates and revise the entire penalty system when he takes office in a way to make it possible for the watchdog to slap meaningful financial penalties on violators.

The FTC chairman also promised to set up a new division within the agency that handles antitrust policies for conglomerates and monitors them.

The South Korean fair trade law forbids unfair support to affiliates inside a business group that are effectively owned by the main stakeholders of the conglomerate. Such trading is blamed for allowing so-called owner families an easy way to make huge sums of money by winning lucrative contracts with other companies within the group. This is seen as undermining the principle of fair competition. 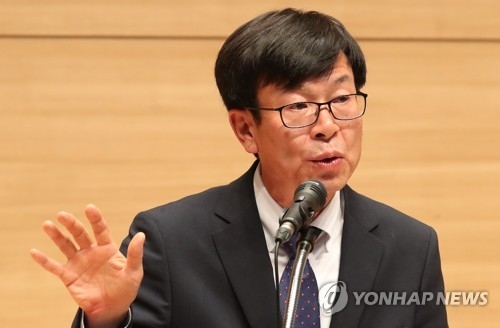 About reforming the cobweb-like governance of family-run conglomerates, the FTC head said he will not be pushy, and remain coherent and predictable.

South Korea's conglomerates largely rely on controversial cross-shareholding arrangements among their affiliated companies to strengthen their owner families' control over the entire group.

President Moon has pledged to tackle such practices and said Kim is the right person to resolve the matter that has been cited for hurting corporate transparency.

"I'm not trying to do everything all at once. I'll not carry out reform that way," Kim told reporters after the inauguration ceremony. "Corporate issues are complex and complicating, as there are conflicting interests among related parties. The FTC will closely cooperate with other government agencies and ministers in conducting surveys first and come up with consistent and predictable business policies."

The official said he will unveil a detailed plan on this issue next week.