According to the sources, the Galaxy S8+ and the Galaxy S8 received 82 points each in the Consumer Reports smartphone ratings, the highest number tallied, followed by the Galaxy S7 Edge with 77 points. LG's G6 came in fourth.

The Consumer Reports said the Samsung smartphones all excel at nearly everything, by having top-notch cameras, gorgeous displays and long battery lives.

The Galaxy S6 and the Galaxy S7 smartphones reached the 1 million unit sales figure in 75 and 74 days, respectively, in South Korea, after they were officially released April 21. Last month, Samsung said the global sales of the Galaxy S8 series came to 5 million units. 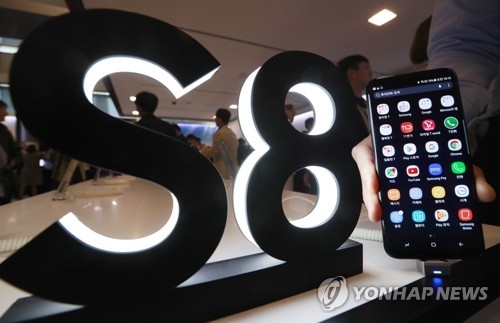 Samsung has been focusing on promoting the Galaxy S8 series, apparently to overcome its tainted reputation sparked by the suspended production of the Galaxy Note 7 phablet last year.

The Galaxy Note 7 phablet was pulled from the market due to some of the devices catching fire while charging.

The Galaxy S8 and Galaxy S8 Plus feature high-resolution displays that curve on both sides and come with various innovative technologies, such as iris and face recognition scanners, and a smart voice assistant program named Bixby.

LG's G6 started reaching consumers in early May. Featuring a 5.7-inch screen and dual 13 mega-pixel rear-facing cameras, the smartphone has been enjoying rising popularity on the back of what it calls a "Full-Vision" display that comes with an 18:9 screen aspect ratio.