SEOUL, June 14 (Yonhap) -- K-pop quartet Mamamoo has unveiled a teaser video for its upcoming song "As For Me."

The short clip uploaded on YouTube on June 13 features the members dressed in all white posing elegantly for the camera on a white-themed set filled with geometric pillars.

The song will be included on the group's fifth EP album titled "Purple" scheduled to be released on June 22.

The upbeat dance track was written by the Kim Do-hoon, head of the group's agency RBW who has produced the group's music since its debut.

The K-pop group has been known to be funky and witty or boyish at times, but with "As For Me," it decided to go with a strong but at the same time feminine concept. 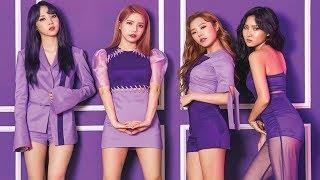 Mamamoo drops teaser for 'As For Me'

Mamamoo drops teaser for 'As For Me'