SEOUL, June 14 (Yonhap) -- A Yonsei University graduate student arrested as a suspect for a nail bomb blast that injured a professor this week told police Wednesday he designed the explosive by himself without searching the Internet.

Police apprehended the student, identified only as 25-year-old Kim, Tuesday night for sending a homemade bomb to his professor's office at the engineering faculty building of the university in western Seoul earlier in the day. The professor also surnamed Kim suffered burns after opening a box containing the explosive.

He decided to make one after he read the news on the terror attack in Manchester, Britain. Kim began to work on the bomb in late May and completed it in about two weeks, the police said.

The explosive, which was placed inside a drink tumbler, had a detonator connected with wires and four batteries that can be purchased from any hardware store. It was filled with gunpowder and dozens of small bolts, which police suspect were intended to maximize the damage.

The tumbler bomb was designed to go off as soon as the box was unsealed. But the explosion wasn't powerful as the mixture combusted too fast.

The police declined to disclose details about the motive, saying that they need to investigate further. "We're not at that stage (to announce them) yet."

But the police findings so far indicated that it was a deliberate job, since he created an alibi for his presence near the professor's office around the time of the incident.

Kim later admitted to making and placing the bomb after the police found surveillance footage of him throwing out a plastic medical glove that had gunpowder residue on it. The police will likely seek an arrest warrant for him as soon as they confirm his charges. 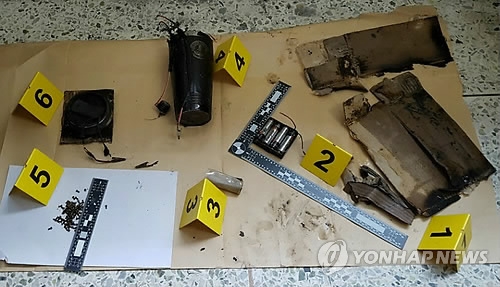 (LEAD) Suspect says he made Yonsei University bomb by himself

(LEAD) Suspect says he made Yonsei University bomb by himself